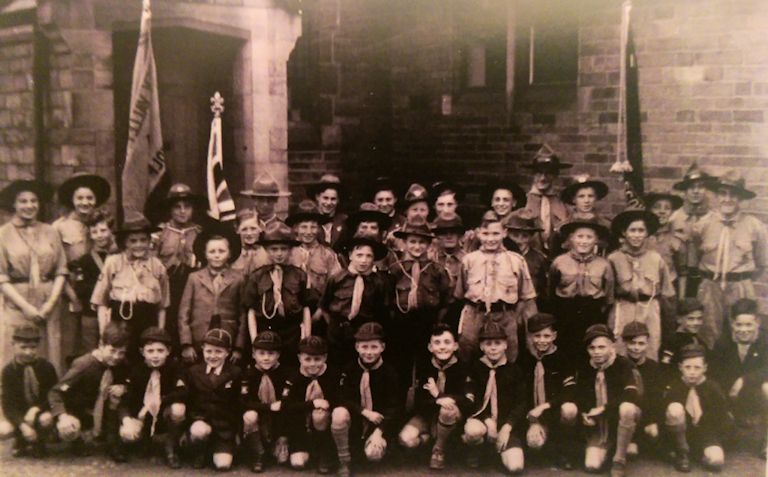 The 11th Spen Valley Scout Group Was formed in 1947, at the instigation of Mr Jim Cousins of Hunsworth Lane.
The group was originally registered as 11th Spen Valley (St Peters) and an active committee met monthly to organise fund raising events.

Originally meetings ere held in the old mission church in Hunsworth Lane, soon afterwards however a HQ was made available in a two story barn at Stonelands Farm Hunsworth Lane.

In February 1949 Mr Cousins reported that for a nonimal sun of £5 the group had received from the Liversedge Scots, 5 good sized tents, 1 small one, a treck cart and a cupboard.  The first troop camp was held in August 1949 near Whitby.

A successful Christmas Faire was held in the BBA canteen, when almost £300 profit was made, unfortunately this caused a rift between the Scout group and the Church.  It was believed that the church wanted some of the money raised.  A special meeting was held at the church at which the vicar, Mr Fallow called for cooperation and conciliation between the Scouts and the Church.

It appears the vicar’s words went unheeded and the activities of the group were held in abeyance until the group was re-resisted as 11th Spen Valley (Hunsworth) an un-sponsored group on the 12th November 1949.

The group were asked to vacate the Stonelands Farm Barn by the end of September 1961 and moved into the “tiny” lower ground floor of St Peters mission church, in Green Lane.  In 1963 Spenborough Corporation agreed to lease a plot of land on the recreation ground at Hunsworth for the sum of £5 per annum, for 5 years.  A “new” HQ was opened by the County Commissioner; Mr John Foster Beaver on 22 May 1965.
The HQ severed the group well, but in 1997 the group committee decided that in order to ensure the continuity of the group a replacement HQ was necessary. 10 Years and £100,000 later the current HQ was opened on the site of the original HQ by District President, former District Commissioner and long time friend of the 11th; Philip Malpress.